Home » GENERA D-F » Drosanthemum » Drosanthemum hispidum leaves and flowers
Back to Category Overview
Total images in all categories: 8,984
Total number of hits on all images: 3,986,433 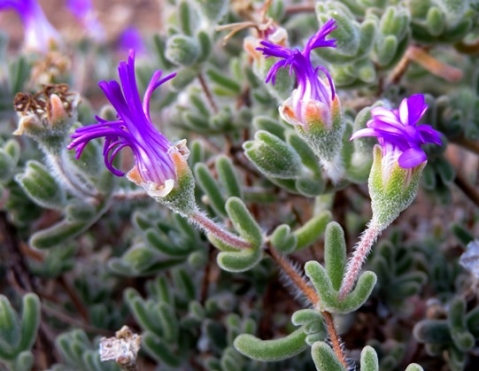 Previous
Image 9 of 24
Next

The flowers, coloured in various shades of purple, sometimes with the addition of some pink, grow one whorl of petals spreading to 2 cm in diameter. The long, narrow petals are oblanceolate (wider near the tip), to slightly spoon-shaped. The petal bases are sometimes white, the flowers sometimes monocoloured.

There is an erect bunch of stamens in the flower centre. The anthers are white or yellow, their colour probably relating to their ripeness. Filamentous staminodes (sterile stamens lacking anthers) are absent although occurring in some other Drosanthemum species. The stigmas are long and thread-like. The fruit capsules have covering bodies and valve wings (Vlok and Schutte-Vlok, 2010; Smith, et al, 1998; Herre, 1971; iNaturalist).