Home » GENERA D-F » Dioscorea » Dioscorea elephantipes caudex like a cortex
Back to Category Overview
Total images in all categories: 10,855
Total number of hits on all images: 5,509,151 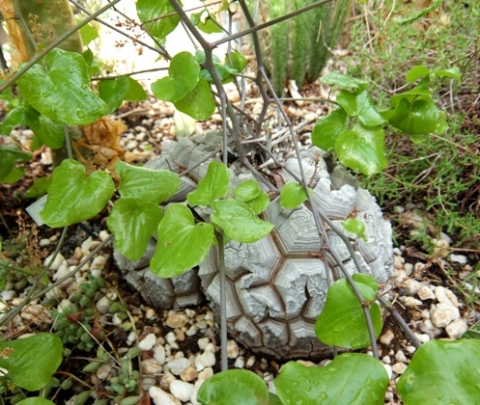 Previous
Image 1 of 20
Next

The allure of the prominent caudex of Dioscorea elephantipes establishes the plant firmly in xeriscaped gardens of the world as a sought after novelty. The hard scale patches around the deep fissures upon the caudex cover its starchy interior.

Slow-growing and long-living, this hardy perennial may last for 70 years. The plant’s growth rhythm may vary, although summer dormancy is typical in its mainly winter rainfall habitat… it sleeps better when it is dry, just like children.

The stringy stems render it a climber, the water and food storage capacity of the caudex make it a succulent. In nature it is found in the south of South Africa in the Western and Eastern Cape, as well as in the arid west of the Northern Cape from Namaqualand and the Richtersveld into southern Namibia (Smith and Crouch, 2009; www.pacificbulbsociety.org).