Home » GENERA D » Dioscorea » Dioscorea elephantipes near Mapungubwe
Back to Category Overview
Total images in all categories: 11,131
Total number of hits on all images: 5,810,027 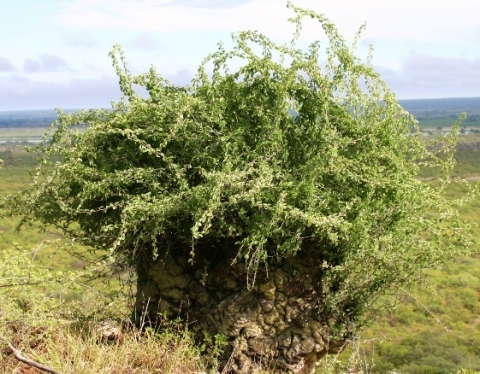 Dioscorea elephantipes or the elephant's foot grows bark on the upper surface of its caudex that resembles the shell of a tortoise. Male and female flowers appear on separate plants (i.e. they are dioecious like many flowering plants). The plant is also deciduous, losing its leaves in summer, unlike many that are leafless in winter in the summer rainfall areas.

The plant in picture is an unusually large specimen, compared to the average elephant's foot cherished by the gardeners fortunate enough to grow them. It was photographed on a farm near Mapungubwe close to the Limpopo River. Elephant's foot is commonly found in nature in parts of the Karoo and Namaqualand.

Could this one with its massive stem, uneven bark and profusion of foliage be another Dioscorea species? There are more than 600 species in the yam family to choose from.