Home » GENERA D » Dioscorea » Dioscorea elephantipes
Back to Category Overview
Total images in all categories: 11,246
Total number of hits on all images: 5,961,241 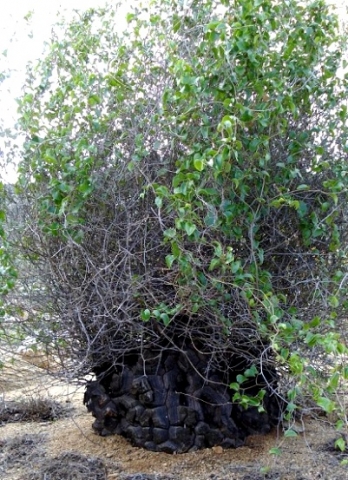 This specimen of Dioscorea elephantipes is smaller than the huge one also shown in this Album. More of the conventional appearance of the plant as it is generally known is presented here. Nutrient and water in the caudex await 'the not so rainy' day when the plant may need to draw on its stored resources.

Above the corky brown bark covered in a geometric pattern, grows rambling branched vines full of heart-shaped to egg-shaped leaves. The dormant season when leaves are shed may be entered by the plant erratically, even several times per annum. The plant does not send down deep roots, which would have been a waste after making such ample provision for storage space in the caudex.

The small yellowish green flowers arrive in late spring and summer. One of the common Afrikaans names for this plant is hottentotsbrood (Khoi bread), reflecting the practice of the indigenous tribe to use the caudex as food. They had a way of baking pieces and overcoming the toxicity in the plant tissue (Bond and Goldblatt, 1984; www.toptropicals.com).