Home » GENERA D » Dioscorea » Dioscorea hemicrypta
Back to Category Overview
Total images in all categories: 11,131
Total number of hits on all images: 5,810,398 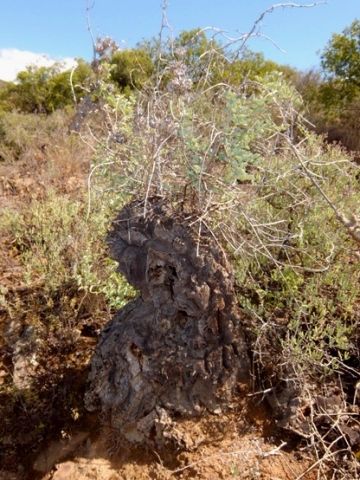 Previous
Image 7 of 20
Next

Dioscorea hemicrypta is a perennial, a deciduous climber with a large caudex. This tuber is borne half exposed above ground. Different Dioscorea species bear the Afrikaans common name olifantsvoet (elephant’s foot), referring to these imposing stems. The caudex commonly reaches heights around 1,5 m, while the vines growing from its top may exceed 4 m in length.

D. hemicrypta is found in the Northern Cape and the Western Cape, particularly the Little Karoo, but also across the border in southern Africa. The plant grows on rocky, south-facing, lower slopes in clay soils where the varied shrub vegetation often includes guarri or spekboom. The species is not considered to be threatened in its habitat early in the twenty first century.

The soft caudex pith has featured in ethnic medicine and as a starch food, while it forms part of porcupine diet where on offer. Some other tropical African Dioscorea species known as yams are important food and agricultural plants (Vlok and Schutte-Vlok, 2010; Bond and Goldblatt, 1984; Smith, et al, 1997; www.redlist.sanbi.org).