Home » GENERA D » Dioscorea » Dioscorea hemicrypta caudex
Back to Category Overview
Total images in all categories: 11,246
Total number of hits on all images: 5,961,329 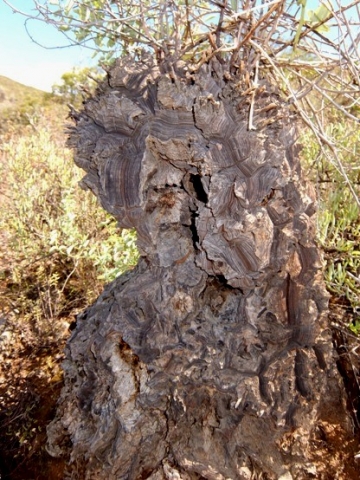 The caudex or basal stem of Dioscorea hemicrypta, a half subterranean tuber, becomes from 30 cm to 50 cm in diameter. There is often a mounded pattern of attractively shaped, coarsely ridged bulges on the surface, resembling relief maps or tortoise-shell.

This isn’t always so, as some plants have smooth bark, while other Dioscorea species, particularly D. elephantipes also have similar three-dimensional bark patterns (Vlok and Schutte-Vlok, 2010; Bond and Goldblatt, 1984).