Home » GENERA D-F » Drosera » Drosera hilaris leaf rosettes on the ground
Back to Category Overview
Total images in all categories: 8,883
Total number of hits on all images: 3,862,721 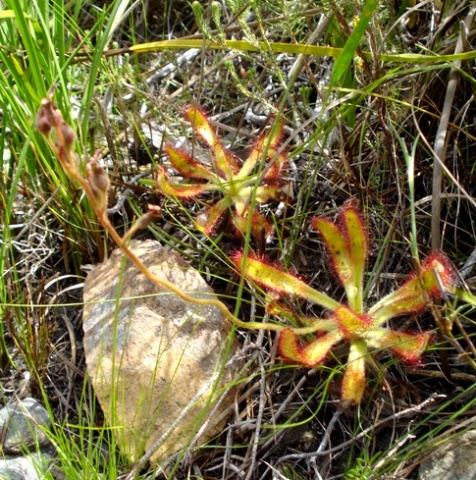 The basal leaf rosette of Drosera hilaris carries most of the long leaves of this plant; few leaves occur higher up on the sturdy stem and sometimes none or hardly any are seen.

The leaf petioles are wide and channelled or nearly flat like the blades, although not as broad as the blades and not covered in glandular hairs. There is, however, a fine covering of soft, “ordinary” hairs on the leaf stalks as well. Presumably a lost little insect could perch safely on a D. hilaris petiole? The sweetness on the adjacent leaf blade surface will probably call it to its doom very soon.

Another Drosera species, D. capensis, also has longish strap-shaped leaf blades and long leaf stalks, but its petioles are narrow, unlike those of this species.

The rosettes in the photo have reclining leaves spreading out and quite yellowish at the end of October after a few dry months in Fernkloof. Winter growing new leaves will follow rain and be much greener. They will be much more erectly positioned in the rosette than seen here (Bean and Johns, 2005; Bond and Goldblatt, 1984; iSpot).