Home » GENERA D-F » Drosera » Drosera trinervia ready to bloom
Back to Category Overview
Total images in all categories: 8,890
Total number of hits on all images: 3,864,909 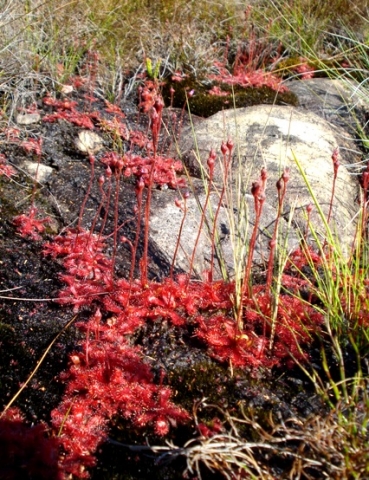 The flower stalks of Drosera trinervia, an insect eating plant, are long and erect, but not for the obvious reason. One might think that insect eating plants could really worry about selling themselves short by eradicating their pollinators!

The long stalks aren’t there to keep the pollinators from being eaten. That problem has been overcome through many thousands of years of evolution that formed long-standing alliances with pollinator species. There isn't much overlap between pollinators and eaten insect species in the lifestyle of Drosera... barring the occasional mishap!

Well, remember the Greek god, Cronus, father of Zeus, who ate his children? So plants don't even come close in that department. Almost like city fathers who wouldn’t dream of building an abattoir next to the town theatre or art gallery; purely a matter of aesthetics. Long stalks are just for better flower marketing to pollinators.