Home » GENERA D-F » Drosera » Drosera hilaris
Back to Category Overview
Total images in all categories: 9,390
Total number of hits on all images: 4,217,880 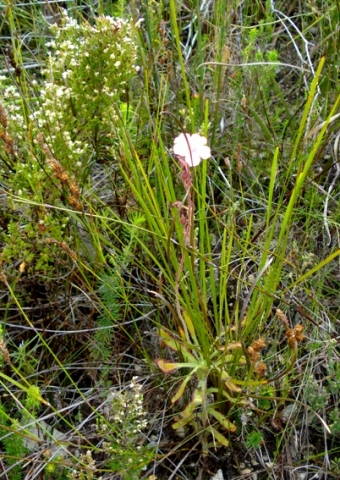 Previous
Image 9 of 18
Next

Drosera hilaris, a sundew sometimes referred to as the sprawling sundew, is a deep-rooted, winter-growing perennial with unbranched stem that grows to 40 cm in height.

The Greek word drosos meaning dew reflects the resemblance between the mucilaginous, stalked leaf glands and morning dew as seen on vegetation in morning light after a clear night when there is moisture in the air.

Where the sprawling of the common name comes from is unclear. If the stem does not branch and presents its flowers atop a longish scape, sprawling can only reflect the tendency of several rosettes appearing close together. As for the specific name hilaris, it is constituted from the Latin words hilo or hilum, meaning a trifle and aris meaning resembling. So the species is signified as hilariously cheerful, rollicking or boisterously merry; features that are hard to spot.

Roughing it while flowering among robust and more bulky neighbouring plants, the specimen in picture is holding its own. Drosera often grows in damp spots also favoured by many other plant species, making it remarkable how often one finds patches of bare soil visible in the vicinity of a Drosera plant in habitat. This species prefers sheltered places on well-drained lower mountain slopes, not necessarily damp ones, as some other Drosera species do require.

The species distribution lies in the southwestern extreme of the Western Cape, on mountains from the Cape Peninsula to Paarl and Caledon. This plant was seen at the end of October near Hermanus, roughly the eastern limit of the plant’s distribution in nature.