Home » GENERA D-F » Drosera » Drosera hilaris flower
Back to Category Overview
Total images in all categories: 9,570
Total number of hits on all images: 4,299,809 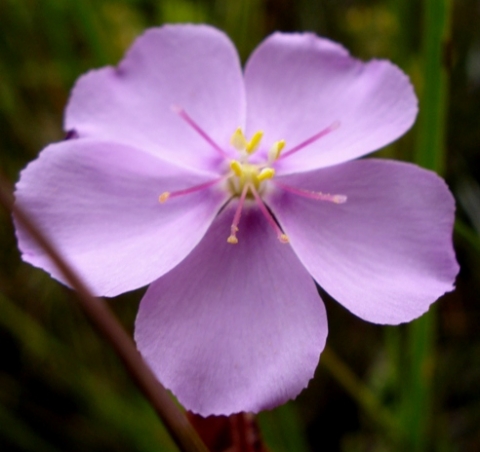 The flowers of Drosera hilaris appear in a cyme of up to about eight flowers, the cyme shape a helix on a long erect scape from a leaf axil. The buds droop from the slender peduncle, an open flower faces up to the sun, only opening when the sun shines and closing at night.

The pink flower in the photo presents its five obovate petals with raggedly toothed upper margins, not adhering to an exact petal shape even in the same flower. Petal margins along the sides are entire in this flower and may be smooth all the way round on some flowers. The spreading corolla, its petals slightly concave above, measures about 2 cm in diameter.

The five yellow anthers, appearing double-barrelled and pointed in arrow-shaped fashion, are held erectly on short white filaments around the superior ovary, whitish and globose in the photo.

The styles or stigma branches diverge immediately above the ovary, six of them visible here. They are much longer than the stamens and spread widely. The stigmas thus probably succeed in avoiding their own flower’s pollen, respectably shunning incest, while possessing the most coquettish colouring along their purplish lengths for ensnaring passerby pollinators. Flowers with paler stigmas are, however, also seen, but are they equally effective in seed production?

Drosera is not generally big on pollinator contracts, as self-pollination furnishes good backup for a genus with a reputation of devouring insects. But conventional flower charms, where they are of high quality will surely be used.

When the flower is dull, the "selfie" does the job and no insect public relations are needed. Such a dual stratagem functions effectively for countering the consequences of treating some insects harshly. The logic would appeal to people: they know all about smiling at some, frowning upon others.

Safety first through belt-and-braces measures involving both eating insects while self-pollinating and also being pollinated by (mainly other) insects, has served Drosera well. The genus is spread worldwide and has diversified into about 130 species, all by steadily dining on insects for thousands of years while learning to pollinate themselves. Some of these small insects may not even have been named and described in science, let alone commiserated with.