Home » GENERA D-F » Drosera » Drosera trinervia flower
Back to Category Overview
Total images in all categories: 8,878
Total number of hits on all images: 3,858,975 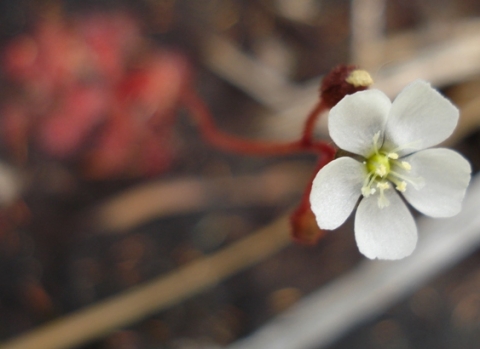 The flowers of Drosera trinervia, in Afrikaans snotrosie (little snot rose), are borne in a raceme of up to ten flowers, although only a few usually occur at the tip of the erect, leafless scape. (Could there ever be a more unflattering common name for a pretty wee flower?)

The five obovate petals of D. trinervia have nearly flat tips in the photo. Open flowers measure 10 mm to 16 mm across. Flower colour is often white, sometimes mauve or red. The flower is sometimes described as having a dark corolla centre, but the literature and available photos are not consistent in this. The flower stigma is divided into many branches.

These plants are found on damp peaty sandstone slopes from Namaqualand to Agulhas.

Flowering happens between late winter and the end of spring (Privett and Lutzeyer, 2010; Vlok and Schutte-Vlok, 2010; iSpot).