Home » GENERA D-F » Drosera » Drosera cistiflora
Back to Category Overview
Total images in all categories: 9,385
Total number of hits on all images: 4,216,724 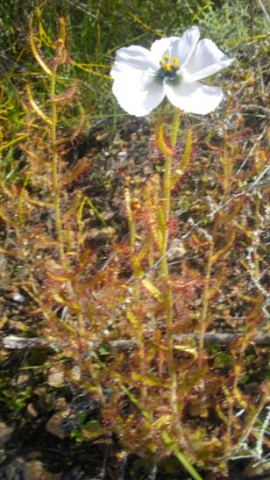 Previous
Image 4 of 18
Next

The poppy-flowered sundew has scattered leaves up each stem. The leaves are narrow, alternate and curving upwards. The reddish fluffy and sticky leaf covering serves as an insect trapping device. Insects are a supplementary food to the plant that needs more nutrition than the soil can provide. There is sometimes a rosette of basal leaves around the stem at ground level, but not always.

The distribution area of this plant is in the Western Cape and the western part of the Eastern Cape in a broad band stretching along the coast. The plant grows in moist places on sand flats and slopes, often in partly shaded spots. Drosera is a large genus with some of its members growing on every continent on earth apart from Antarctica (KZN Wildlife Rhino Club News Oct 2010; Manning, 2009).