Home » GENERA A » Anacampseros » Anacampseros recurvata subsp. recurvata
Back to Category Overview
Total images in all categories: 12,068
Total number of hits on all images: 7,360,660 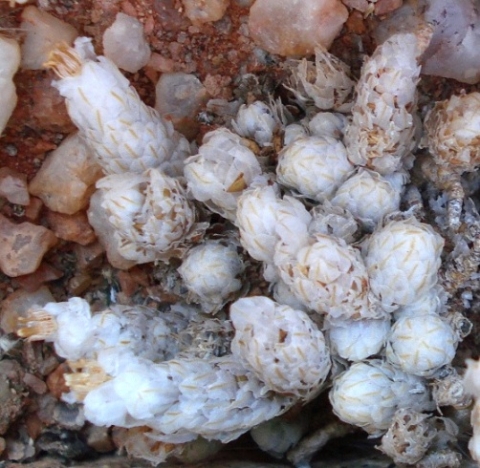 The characteristic leaf covering stipules are loosely positioned over the tiny leaves adpressed to the stems, giving the plant an untidy, papery appearance. The beige-brown withered flower remains from the previous season can be seen on the bigger stems of the plant in picture.

The subspecies distribution ranges from the south-east of the Richtersveld southwards into Namaqualand, the most widespread member of its species. The plant grows on quartz ridges and slopes in arid conditions. The subspecies is not considered to be threatened in its habitat early in the twenty first century.

The other recognised subspecies are A. recurvata subsp. buderiana, growing in a small part of the Richtersveld where it is considered to be vulnerable and A. recurvata subsp. minuta found in Bushmanland west of Kakamas. For the latter plant the survival status is unknown due to insufficient data for an assessment (Smith, et al, 1997; Williamson, 2010; www.redlist.sanbi.org).