Home » GENERA A » Anacampseros » Anacampseros rufescens
Back to Category Overview
Total images in all categories: 11,401
Total number of hits on all images: 6,175,213 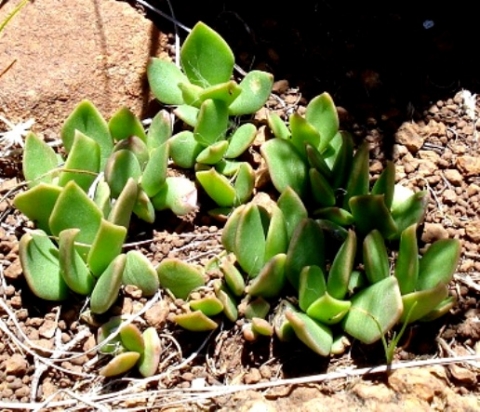 The habitat of Anacampseros rufescens, in Afrikaans known as boesmansuring (San sorrel), is exposed short scrub on barren flats and sparsely vegetated rocky slopes of the central to eastern Karoo. This is a low rainfall area with extreme temperatures.

The clump of leaf rosettes shown here is cosily ensconced in gravelly soil among rocks in the northern mountainous region of the Eastern Cape. The plant in picture looks young and fleshy in the middle of the rainy season in January. Leaf colour may show lots more red (warranting the specific name), purple or even pale creamy when exposed to harsh conditions in other seasons.