Home » GENERA A » Anacampseros » Anacampseros papyracea subsp. papyracea leaves under scales
Back to Category Overview
Total images in all categories: 11,506
Total number of hits on all images: 6,493,763 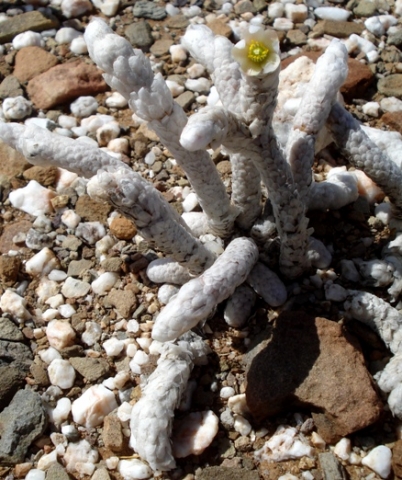 The leaves of Anacampseros papyracea subsp. papyracea are very small, covered by imbricately overlapping white scales or stipules that are smoothly rounded, becoming 5 mm long and wide. The scales serve as sunshields, reflecting much of the harsh sunlight in the often exposed living conditions of the plants among larger shrubs. The leaves grow on slender, cylindrical, grey stems branched at the base.

These plants were used in olden times as yeast for brewing beer and baking bread. The Afrikaans common names, kareemoerwortel (Searsia dregs root) and moerplantjie (little dregs plant) reflecting this application have probably outlived it.

Some Avonia and Anacampseros plants are said to contain psychoactive substances. They are suspected to have been used for inducing such effects by at least the indigenous people (Vlok and Schutte-Vlok, 2010; Van Wyk and Gericke, 2000; www.llifle.com).