Home » GENERA A » Anacampseros » Anacampseros papyracea subsp. papyracea
Back to Category Overview
Total images in all categories: 12,068
Total number of hits on all images: 7,360,668 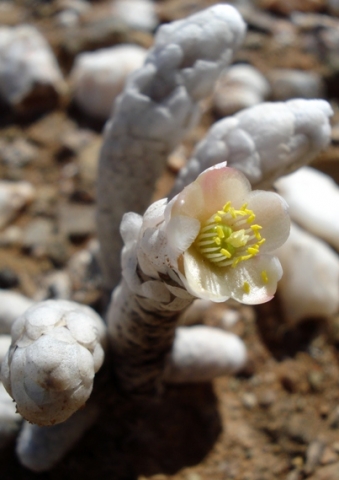 The species distribution is in the Western Cape in the Little Karoo to the Eastern Cape and northwards into the Great Karoo. The habitat is lower slopes of hills and ridges in clay or loam soils. Exposed white quartzite pebbles are common among the many small shrubs and few larger ones found on this land.

The leaf scales on the small plants serve as camouflage against detection by those that might eat or dig up the plants. The species is not considered to be threatened in its habitat early in the twenty first century.

The plant used to be called Avonia papyracea subsp. papyracea and is similar to subsp. namaensis of the Richtersveld and southern Namibia in the northwest (Vlok and Schutte-Vlok, 2010; www.llifle.com; www.redlist.sanbi.org).