Home » GENERA A » Anacampseros » Anacampseros telephiastrum
Back to Category Overview
Total images in all categories: 12,081
Total number of hits on all images: 7,379,556 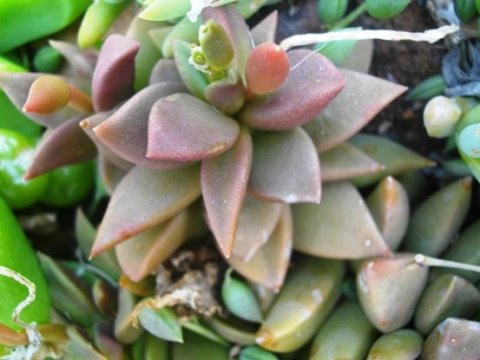 Anacampseros telephiastrum, commonly known in Afrikaans as gemsboksuring (gemsbok or oryx sorrel), is a spreading, low-growing and clumping, succulent perennial, from 5 cm to 15 cm in height.

Like some other Anacampseros flowers these open only for a few hours on a summer afternoon. They are also planted for the attraction of their stubby succulent leaves. The exceptional leaf colour range can be partly seen in the photograph (although there are some leaves of other succulents in the periphery).

A. telephiastrum plants assume resemblance of the stony, bare and arid environment of their natural habitat. This helps them to avoid being consumed by thirsty and hungry passersby who share this living space.

The imitation feature earned this and many other plants that developed some advantageous likeness to something in the neighbourhood for a useful purpose the shared name of mimicry plant.

The species distribution is widespread in the Western Cape from Worcester through the Little Karoo into the Eastern Cape inland to southern KwaZulu-Natal and inland into the south of the Northern Cape and the southern Free State.

The habitat is semi-arid stony slopes and flats among taller scrub. The species is not considered to be threatened in its habitat early in the twenty first century (Frandsen, 2017; Vlok and Schutte-Vlok, 2015; www.hortmag.com; http://redlist.sanbi.org).