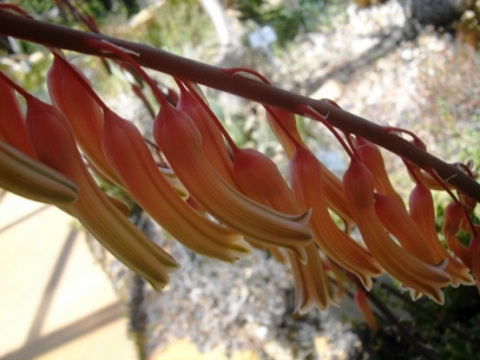 The flowers of Gasteria pillansii var. pillansii are characterised by slender curved perianths, attractively positioned along the long, usually single raceme. The tubes in this species have only slight basal swellings unlike the well filled stomach shapes of some other members of the genus. They hang from flexible pedicels, tending to be aligned in a neat rank, although not on the specimen in this picture. Perianths are dull pink at the base, whitish near the mouth with dark green lines running along the outer tepals into the out-curving tips, getting darker as they progress.

This is the only true winter rainfall species of the genus, flowering in summer from winter growth. There is considerable variation in G. pillansii over the large distribution, seen in leaf and perianth size. The species also shares similarities with several other gasterias (www.plantzafrica.com).