Home » GENERA G-H » Gasteria » Gasteria croucheri
Back to Category Overview
Total images in all categories: 9,900
Total number of hits on all images: 4,599,805 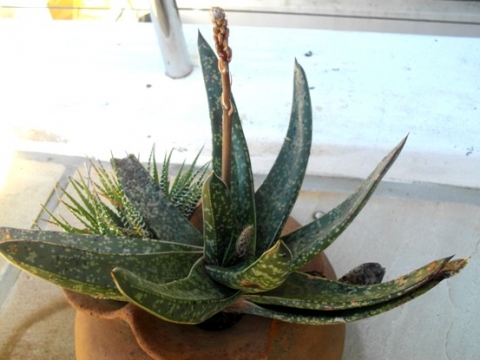 The thickly succulent, slowly tapering leaves are triangular in cross-section, caused by a very one-sided leaf keel. The broad upper and lower leaf surfaces angle away from each other on one side by a third, lateral surface, usually matched on the opposite side by a hard, angular margin. Cartilaginous white ridges occur on the leaf margins. The lateral leaf asymmetry remains even when some old leaves on mature plants occasionally develop a tiny fourth surface or secondary keel on the opposite side of the leaf as well. The youngest leaves in the centre of the rosette tend to emerge flat or keelless with two surfaces only.

The leaves of the Natal gasteria may curve to the side in a sickle-shape, not consistently favouring the keeled side. Leaf surfaces are smooth on older plants, sometimes slightly tuberculate and rough on young plants. The leaf colour is dark green in picture with white mottling on all the surfaces.

These plants grow solitary or form big clumps, tiny leaf rosettes emerging from the short stem below the lowest remaining leaves, or underground from the root.

The species distribution occurs along a coastal strip in the Eastern Cape and KwaZulu-Natal where it grows among dune scrub, often not easy to spot.

Two separate single flower racemes are emerging on the plant in picture (Smith and Crouch, 2009; www.plantzafrica.com).