Home » GENERA G-H » Gasteria » Gasteria tukhelensis
Back to Category Overview
Total images in all categories: 9,754
Total number of hits on all images: 4,378,466 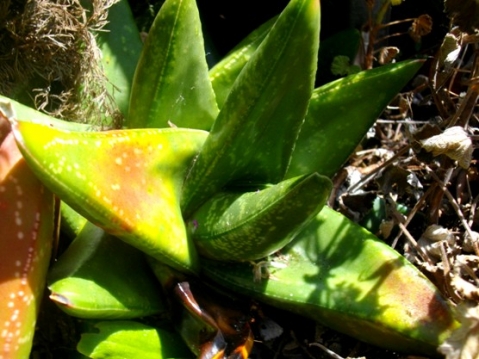 Gasteria tukhelensis, commonly the Tugela gasteria, is a leaf succulent, growing about stemless to heights around 25 cm. Clumps of up to eight rosettes form in mature plants.

The large, open leaf rosettes have dark green leaves that are keeled and become sickle-shaped. The leaves are smooth and glossy, faintly white-spotted in obscure transversal bands. Leaves tend to be tubercled on young plants that have distichous leaf arrangement before the rosettes are formed. Leaf margins are faintly toothed to smooth, the tips rounded to pointed. Leaves become 25 cm long and 5 cm wide.

The inflorescence is a raceme up to 56 cm long, often branching into a panicle of up to three racemes. The flowers droop on stalks up to 17 mm long. Tiny, narrow bracts, papery and pointed, occur at the pedicel bases. The tubular perianth is two-toned, pink in the lower half (nearer the base, although positioned on top in the pendulous flowers), the upper half white with green stripes or channels. The bulge in the thin tube is comparatively small for Gasteria, only about 6 mm wide. The stamens protrude slightly from the flower mouth.

The fruit capsule is erect after the pendulous flowers. It becomes up to 3,2cm long, releasing broad black seeds upon dehiscing.

The species is newly described (2005), thought to be transitional between G. batesiana to the north and G. croucheri to the south. As suggested in the name, the distribution lies in the Tugela valley in KwaZulu-Natal at altitudes around 440 m.

The habitat is inaccessible cliff faces in grassland. Not threatened although rare, G. tukhelensis occurs in a remote area. The photo was taken in Kirstenbosch (www.plantzafrica.com; Wikipedia; www.redlist.sanbi.org).