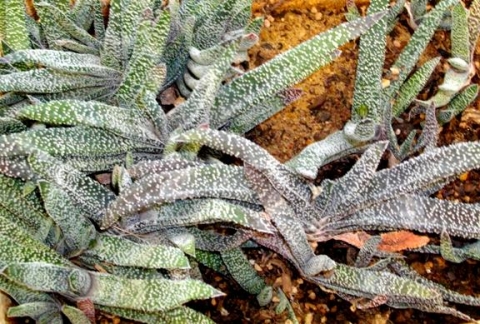 Gasteria carinata var. verrucosa is one of three varieties of G. carinata, a very variable species.

This variety is characterised by dense grey-green leaves which remain opposite in distichous arrangement, not twisting sideways into rosette shape. The leaves are long, narrow and channelled, tapering to variably pointed tips. The leaf surfaces are densely tuberculate, rough from the numerous white surface dots bulging upon them. These tubercles are about randomly distributed. Verrucosa (Latin) means warty or rough. The dotted dark green or purple leaf surfaces form effective camouflage; the plant likely to be spotted by those that will also see the puffadder in time.

The flowers grow in simple racemes, occasionally adding small branches. These inflorescences may be anything from 15 cm to 90 cm long. The flowers, orange-pink and bulging at the base, are from 2,5 cm to 4 cm long. Flowering occurs early in spring.

The distribution of the variety is in the southern parts of the Western Cape. The plant grows in dry limestone fynbos. The variety is not considered to be threatened in its habitat early in the twenty first century.

G. carinata is sometimes commonly called the Bredasdorp gasteria. This variety is in Afrikaans known as bontaalwyn (multicoloured aloe). Not an Aloe, Gasteria is part of the same family, the Asphodelaceae; the relationship sensed by the local observers (www.llifle.com; www.plantzafrica.com; www.redlist.sanbi.org).