Home » GENERA G-H » Gasteria » Gasteria disticha
Back to Category Overview
Total images in all categories: 9,742
Total number of hits on all images: 4,372,241 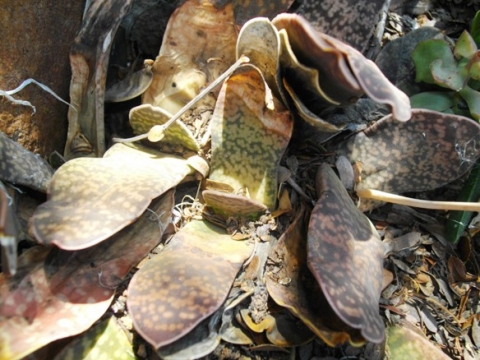 Gasteria disticha has a list of names that could make some old royal families of the world jealous. Fortunately the small succulent from the Asphodelaceae family is not bearing them all at one time, but might well cause bewildered over its unstable identification. At least 29 official botanical names have succeeded each other since it was first described (www.desert-tropicals.com).

A large geographical distribution where variable conditions prevail added to intraspecies variation. Beyond a certain point forms, varieties, subspecies and eventually independent species would come about. The plant in picture displays some dry summer stress that should disappear when the cooler and rainy season arrives.

The leaves are comparatively flat, almost strap-like but not very long, given the looks of some other gasterias. They have scattered white or cream surface spots and nearly rounded tips. The flowers appearing from winter into summer are salmon pink and green with the common Gasteria genus stomach-shape in evidence. The long racemes are slightly curved and quite densely covered in flowers.

Propagation of this plant from seed is common in the international horticultural market. Container and house plant options are common and can work well.