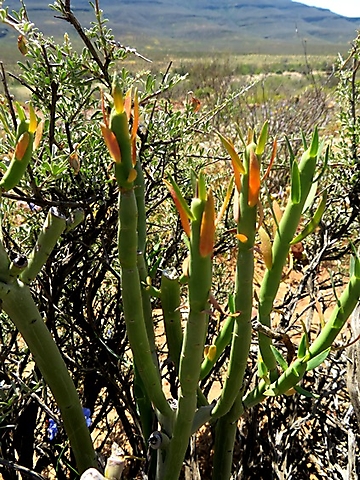 The winter stem-tip leaves of Euphorbia mauritanica are looking well still in September, here in the Biedouw Valley.

They are sessile and erect close to the stems, lanceolate in shape with acutely pointed tips. Small spaced scars spiral around the stems lower down where last year’s leaves were positioned. Usually seen in winter, the leaves change colour as in the photo, dropping off with summer heat or sometimes drought.

The Euphorbia genus comprises species with very diverse traits, adapted to a wide range of conditions in all sorts of habitats. Some are specialised in restricted distributions, others, such as E. mauritanica, thrive in divergent although arid conditions, from extremely harsh climates to mild ones, making them candidates for speciation across their range.

The Richtersveld and southern Namibia are home to this milkbush, but so are higher rainfall southern parts of the west coast and foothills in the Little Karoo. The species also occurs in summer rainfall eastern parts of the country, such as KwaZulu-Natal, the Free State and the Eastern Cape.

Browsing livestock and game residing in these regions are not all in agreement about the merits of this plant as food:  In some areas it is heavily browsed, in others not touched. It may not taste the same where climate and soil treat and challenge it so differently (Smith, et al, 2017; Vlok and Schutte-Vlok, 2015; iNaturalist).