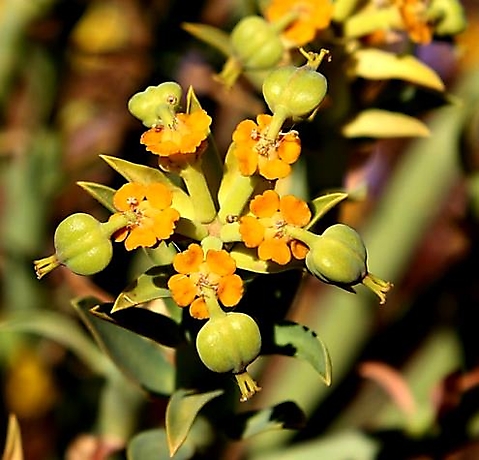 The five stem-tip Euphorbia mauritanica fruits have become too heavy for their stalks to hold erect. There may be up to nine such fruits growing around the initial male flower at a stem-tip.

Each fruit stalk is still surrounded by its five flat, orange-brown glands that developed earlier at the base of the bisexual pseudoflower or cyathia. The pedicel of the overall cyathia lower down is much thicker and sturdier than the upper part that only held the ovary, now the fruit.

There is a narrow, bulging ridge between each pair of fruit segments on the green body, while the styles persist on top of the fruit at this stage.

Pointed tips of the in-curving and sometimes sideways twisted leaves are visible close to the flowers and their globose, three-segmented fruits (Smith, et al, 2017; Vlok and Schutte-Vlok, 2015).