Home » GENERA E-F » Euphorbia » Euphorbia mauritanica flower
Back to Category Overview
Total images in all categories: 11,894
Total number of hits on all images: 7,136,461 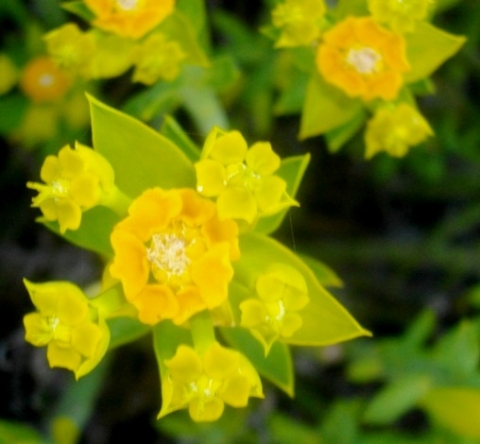 The geel melkbos (yellow milk bush) as Euphorbia mauritanica is known in Afrikaans, is a monoecious species, i.e. the male and female flowers normally referred to as false flowers, pseudo-flowers or cyathia, grow on the same plant.

The male flower is the first to be formed at the tips of the many robust stems. A ring of five to seven bisexual flowers then appear in further development of the flowerhead around the old male cyathium.

Around each of the cyathia a ring of bright yellow fleshy petal-like glands can be seen. They are presented upon some pale green, pointed bracts, visible in this photo taken at Grotto Bay on the west coast in August (Vlok and Schutte-Vlok, 2010; Manning, 2009).