Home » GENERA E-F » Euphorbia » Euphorbia obesa
Back to Category Overview
Total images in all categories: 12,058
Total number of hits on all images: 7,353,520 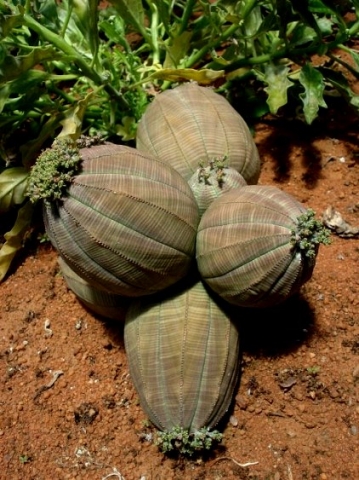 Euphorbia obesa, commonly the Turkish temple or in Afrikaans the vetmensie (fat little human), is a nearly spherical stem succulent reaching about 20 cm in height and 9 cm in width. Elongation into an ellipsoid shape may occur with age.

About eight vertical sections, centrally ridged, meet in sunken seams, the plant sometimes likened to a doorless Zulu hut. E. obesa is without spines, let's not say spineless, while mere vestigial leaves complete the memorable shape. There is a tapering taproot underground.

The stem-body colour varies with prevailing conditions from grey-green to purple-brown. Cross-banding avoids a unicoloured appearance. The skin colours are always subdued by the harsh light, temperature extremes and aridity for the plant to fit into its natural environment, although often insufficiently for the survival camouflage to succeed.

Male and female cyathia (flowers or false flowers) grow on separate plants of this dioecious Euphorbia. They appear at the top of the plant body in a ring on the stem ridges. The yellow-green cyathia are small, growing from round “flowering eyes”.  The fruit is a rounded, three-segmented and pale blue-green capsule, grown short-stalked in a dense cluster on the stem-top around spring and summer.

The species distribution is limited to an Eastern Cape region south of Graaff-Reinet to Rietbron and Kendrew.

The habitat is karoid stony flats and slopes in sandy soils where the plants grow under shrubs. The human urge to own special and pretty objects like art, precious stones or rare plants has brought this attractive plant risk since long ago.

Listed as endangered in nature already in 1915 has fortunately not yet led to extinction more than a century later. The warning never to remove the plant from the veld should be heeded at all times for safeguarding it into the twenty second century if there is one for people. Unfortunately, some herbivores with a predilection for E. obesa stems read and heed warnings as poorly as some people do.