Home » GENERA E-F » Euphorbia » Euphorbia oxystegia
Back to Category Overview
Total images in all categories: 12,061
Total number of hits on all images: 7,359,649 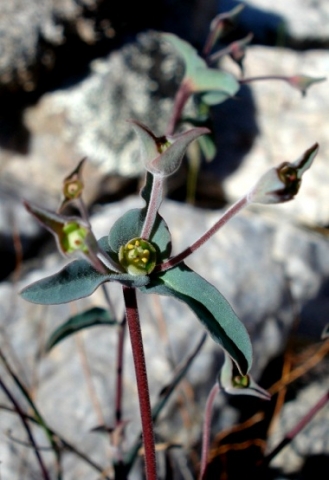 Euphorbia oxystegia is a stem-succulent shrub that reaches 50 cm to 1,6 m in height. The plant grows a few sturdy, erect, cylindrical stems without spines, but with tubercular roughness where the leaves had dropped off. The stems are green among the leaves near the top, brown in the upper leafless parts and grey on the old, lower parts.

E. oxystegia is found in northern Namaqualand and the Richtersveld, from the Stinkfontein Mountains to Komaggas. There is an unconfirmed source placing it in the Eastern Cape. The plant in picture presents a cyme of flowers subtended by a whorl of three bracts, seen near Komaggas.

The habitat is succulent Karoo of quartzite outcrops, the plants growing in red sandy soils. Although the species is rare, its population is stable and not considered to be threatened in habitat early in the twenty first century (iSpot; JSTOR; http://redlist.sanbi.org).