Home » GENERA B-C » Crassula » Crassula muscosa
Back to Category Overview
Total images in all categories: 9,597
Total number of hits on all images: 4,315,456 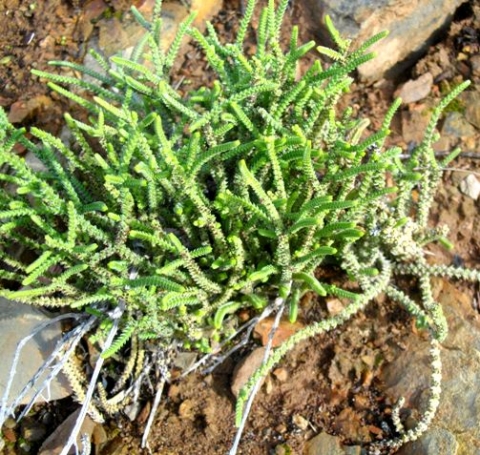 The common Afrikaans name of skilpadbos (tortoise bush) for Crassula muscosa may point to the guilt of a leaf browser. Tortoise survival is, however, much more problematic in South Africa than that of this widely adapted and prolific little Crassula.

Another colloquial name, skoenveterbossie (little shoelace bush) is indicative of the appearance of the stems of the plant. One more such name, boesmanveters (Bushman shoelaces) holds some cultural contamination, as the San people traditionally went barefoot.

Notice the colour variations among the C. muscosa plants pictured in this Album.

There is at least one English name among the residents who know the plant: lizard’s tail, also a descriptor of the stem shape (Manning, 2007; Vlok and Schutte-Vlok, 2010; Bond and Goldblatt, 1984).