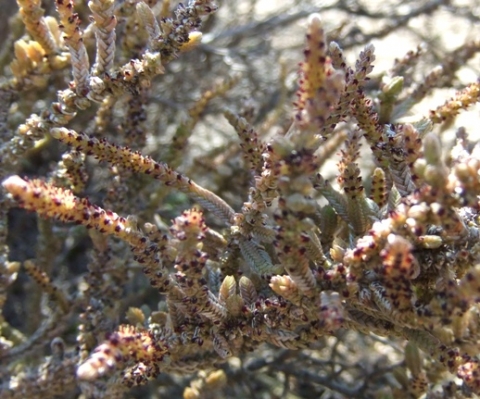 Crassula muscosa var. muscosa, the lizard’s tail or in Afrikaans skoenveterbossie (little shoelace bush), is a dwarf shrub with many brittle stems. The branched four-angled stems have neatly aligned arrays of scale-like leaves below the flowering parts in picture. Higher up the flowers grow from leaf axils. The open flowers show pale yellow in the centre, the closed buds are maroon.

The plant was photograph near Oudtshoorn in August. This variation of C. muscosa occurs from Namibia to the Eastern Cape and is not considered threatened in nature early in the twenty first century. Four variations of C. muscosa are recognised in the 1997 edition of the List of Southern African Succulent Plants (Smith, et al, 1997; iSpot; www.redlist.sanbi.org).