Home » GENERA B-C » Crassula » Crassula mesembrianthemopsis
Back to Category Overview
Total images in all categories: 9,390
Total number of hits on all images: 4,217,507 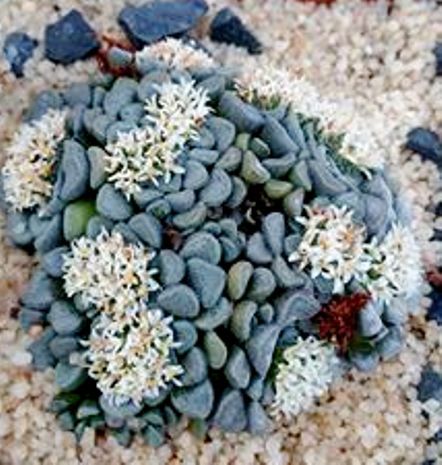 Crassula mesembrianthemopsis, commonly known as foam flower, is a dwarf succulent. It grows a partly submerged, almost flush with the ground, leaf rosette from a corky, succulent taproot that becomes about 7 cm long. The plants grow slowly, estimated to live from 2 to 4 years in habitat.

The leaf rosette becomes only about 6 cm in diameter, the leaves arranged spirally. The succulent cylindrical to club-shaped leaves with roughly triangular tips, reach dimensions of up to 4 cm long and 0,5 cm wide. The central leaves are the shortest. Leaf colour is grey-green, the leaf tips grey, serving as effective camouflage in their habitat.

The tiny fruit capsules that follow the flowers release minute, dust-like seeds for dispersal by wind or also by water among the pebbles of the gravelly ground.

When living conditions are positive, like for this cultivated plant, many underground branches will produce a compact clump of rosettes. Inflorescences then appear in the centres of as many of the mature rosettes as the plant feels up to in a given year.

The species distribution is in the far northwest of the Northern Cape from Kenhardt to Alexander Bay, the mouth of the Gariep and in southern Namibia near The River. The plant survives dry seasons by living with almost its entire body submerged in the soil, only the grey truncated leaf tips hiding in the open among the quartzite gravel of the arid habitat.

Rare, because it is so hard to spot, therefore possibly not rare, the species is not considered to be threatened in its habitat early in the twenty first century (Williamson, 2010; www.redlist.sanbi.org).