Home » GENERA B-C » Crassula » Crassula multicava flowers
Back to Category Overview
Total images in all categories: 9,385
Total number of hits on all images: 4,215,522 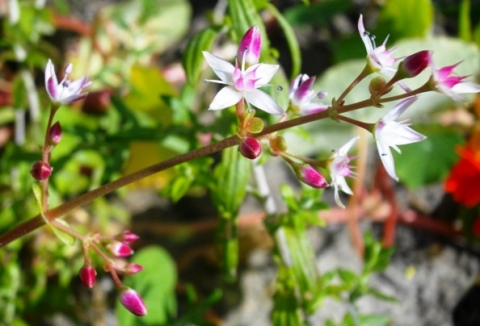 It is the flowers that gave rise to the common name of fairy crassula for Crassula multicava. The delicate four-petalled star-like flowers are white or pale pink inside the corolla, darker pink on the outside of the petals. The tiny sepals are visible at the base of some of the buds in picture, more or less hidden behind most of the open flowers. Inside the open flowers the four erect carpels, also pinkish, can be seen with the thin stamens spreading around them.

Where the flower pedicel or stalk joins the main peduncle or stalk of the panicle, some flat, oval-shaped, green bracts are visible.

When the flowers are gone new leaf clusters grow on the flower stalks that can develop into new plants vegetatively, as has happened in picture already

C. multicava grows in sheltered spots, often in shade, but does well in full sun as well. The distribution is mainly in KwaZulu-Natal, but it also occurs in Mpumalanga, the Eastern Cape and the Western Cape (www.plantzafrica.com).