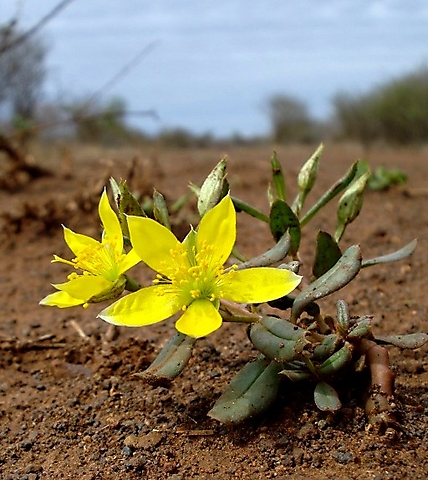 Talinum caffrum, commonly known as porcupine root or in Afrikaans osbos (ox bush), is a perennial reaching 25 cm in height. Growing from a thick, turnip-shaped to carrot-shaped tuber, the plant is, quite variable in size, usually erect initially, the soft stems later decumbent or trailing. These annual stems are succulent, often longitudinally ridged.

The alternate leaves are ovate to oblong, variable in width and shape, their margins rolled under. The blades are dull grey-green in picture, the midribs recessed on the upper surfaces.

The species occurs in all nine South African provinces as well as in some neighbouring countries.

The habitat is varied, the plants growing in the open on rocky outcrops in the summer rainfall region. The species is not considered to be threatened in its habitat early in the twenty first century.

The species has been moved from the Portulacaceae to the Anacampserotaceae family.

The plant features in traditional medicine. It is eaten as a spinach or a quencher of thirst. The plant is seldom browsed (Smith, et al, 2017; Van Wyk and Gericke, 2000; Germishuizen and Fabian, 1982; iNaturalist; http://redlist.sanbi.org).