Home » TYPES » Bulbs » Syringodea longituba
Back to Category Overview
Total images in all categories: 11,912
Total number of hits on all images: 7,163,213 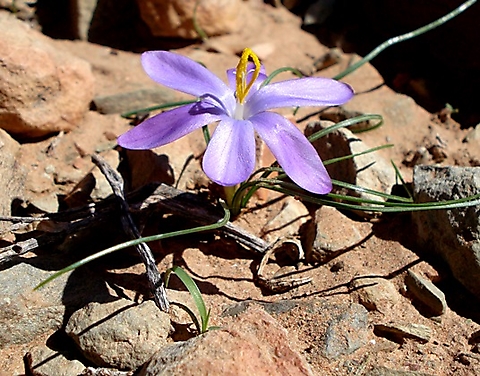 Syringodea longituba, the Cape crocus or Karoo crocus, is a winter-growing, cormous perennial, a stemless geophyte reaching heights from 5 cm to 10 cm. The asymmetric corm in a tunic has a ridge around its base from which the roots grow.

The flower tube base disappears underground, a feature of the Syringodea genus comprising seven South African species. Only S. longituba has two subspecies, this one probably S. longituba subsp. longituba.

The basal tuft of thread-like, dark-green leaves are twisted and channelled above, not wider than 2 mm. A couple of the leaves are only cataphylls.

The species distribution is in the Western Cape and the Northern Cape from southern Namaqualand to the Little Karoo and along the coast from Bredasdorp to Mossel Bay.

The habitat is rocky places where the plants grow in the open or among scrub in semi-arid places. Subsp. longituba is not considered to be threatened in its habitat early in the twenty first century, while subsp. violacea only found in the Western Cape is near threatened, due to the scale of crop cultivation (Vlok and Schutte-Vlok, 2015; Leistner, (Ed.), 2000; Manning and Goldblatt, 1997; iNaturalist; http://redlist.sanbi.org).