Home » TYPES » Bulbs » Gethyllis species near Kleinzee
Back to Category Overview
Total images in all categories: 11,506
Total number of hits on all images: 6,493,921 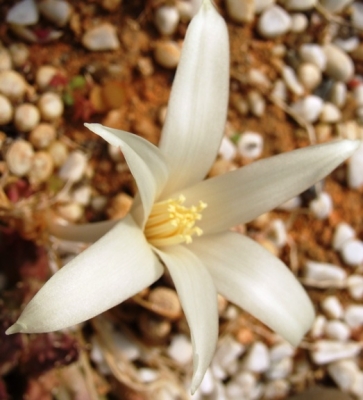 The genus Gethyllis or commonly kukumakranka consists of about 33 species, mainly occurring in the western dry regions of South Africa.

This one is probably Gethyllis afra. The flower emerges after a dormant period during which the above-ground plant parts disappear. The flower is followed by a cucumber-like edible fruit, that has been used in the flavouring of brandy long ago.

It is known in parts of the Western Cape and northwards to the Richtersveld, becoming rarer.