Home » TYPES » Bulbs » Empodium flexile
Back to Category Overview
Total images in all categories: 11,506
Total number of hits on all images: 6,493,862 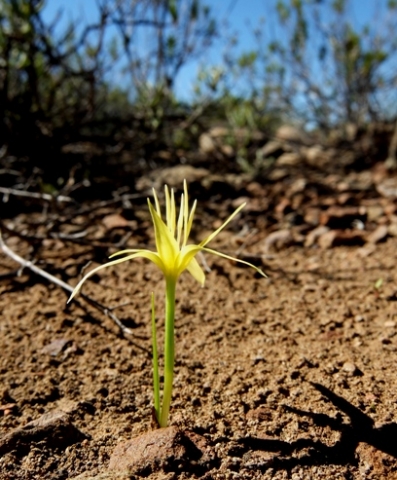 Empodium flexile, colloquially known as autumn star or in Afrikaans as ploegtydblommetjie (little ploughing time flower), flowers after rain in autumn or winter, heralding the time for the farmer when ploughing should commence.

The plant is a small perennial, a cormous geophyte growing annual leaves and flowers above ground.

The species is distributed from Namaqualand to the Little Karoo. This one was seen near Oudtshoorn around the eastern extreme of its distribution.

It grows in clay soils on stony flats and slopes. The species is not considered to be threatened in its habitat early in the twenty first century (Vlok and Schutte-Vlok, 2010; iSpot; http://redlist.sanbi.org).