Home » TYPES » Bulbs » Empodium plicatum
Back to Category Overview
Total images in all categories: 11,905
Total number of hits on all images: 7,156,014 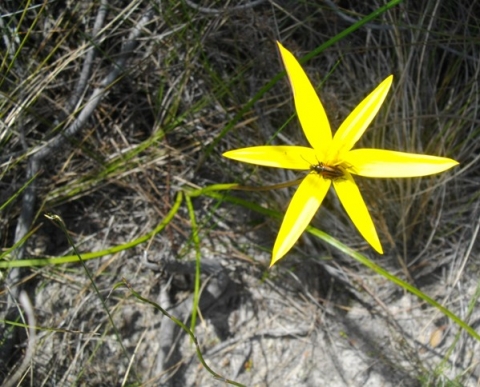 Empodium plicatum is a cormous perennial growing narrow, pleated leaves annually. When in bloom the plant reaches heights from 10 cm to 30 cm.

The star-shaped, yellow flowers are borne solitary on short stems during autumn. One of the pollinating insects was caught in the act in the photo.

The plant grows in the Western Cape and southern parts of the Northern Cape. Its habitat is damp sandy flats and lower slopes. The species is not considered to be threatened in its habitat early in the twenty first century (Manning, 2009; http://redlist.sanbi.org).