Home » TYPES » Bulbs » Gethyllis leaves
Back to Category Overview
Total images in all categories: 11,921
Total number of hits on all images: 7,168,605 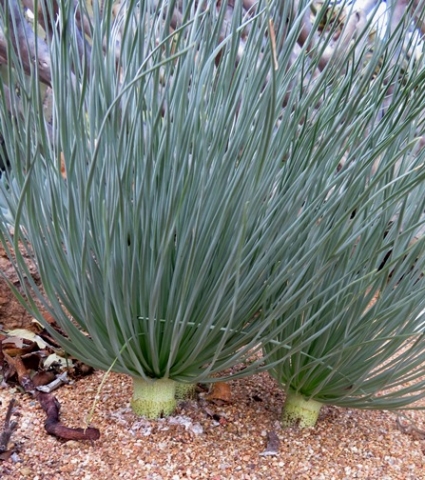 Gethyllis or kukumakranka plants are deciduous, bulbous perennials bearing few to many leaves. The about 33 species of the Gethyllis genus are found in some of the semi-arid areas of southern Africa.

The leaves are mostly absent at bloomtime, while some bear leaves concurrent with their fruit. Some species have spiralling, strap-shaped leaves, others produce these broom-heads of linear, erect leaves. These two plants were seen in the garden of a reserve, marked as Gethyllis britteniana but that species has two or three subspecies alll bearing spiralling leaves.

The aromatic, club-shaped to cylindrical kukumakranka fruits appearing in season at ground level used to bring great excitement. Somewhat succulent, yellow in colour and sometimes spotted dark red, kukumakrankas used to be collected in autumn. They were either eaten or even better: inserted into bottles of brandy for enhancing the aroma of the liquor to a unique quality.

Avid collectors used to mark the spot when they see the flowers for later collection of the fruit that push out of the ground as they ripen. The inferior ovary of the flower is located well below ground-level or inside the bulb. From here the ripening berry forces itself into the open for the short-lived seeds to be dispersed in time for germinating during the winter rainy season.

The Khoi and the San people had easier times finding and using these fruits: The collecting habit is now largely lore from a century ago, as many of the species have become rare, vulnerable or threatened. The habits of people also change as new crazes stir their passion (Manning, 2007; Leistner, (Ed.), 2000; Wikipedia; http://africanaromatics.com; http://redlist.sanbi.org).