Home » TYPES » Bulbs » Hessea breviflora
Back to Category Overview
Total images in all categories: 11,506
Total number of hits on all images: 6,493,885 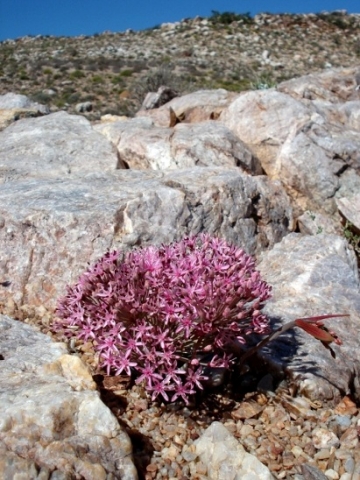 Hessea breviflora, commonly known in Afrikaans as the vuurhoutjiebos (match bush), is a bulbous plant producing an impressive annual inflorescence. This happens before the leaves appear to replenish resources for the next season's flower and seed production. H. breviflora is one of the hysteranthous members of the genus, i.e. its leaves grow after the flowers.

These plants may be found in nature in Namaqualand and the western parts of the Western Cape.

The habitat is mainly rocky ground, sometimes as much as in the photo. The species is not considered to be threatened in its habitat early in the twenty first century.

The genus Hessea comprises 14 species, forming part of the Amaryllidaceae family. Several of the species are from the south-western region of South Africa, endemic to those parts. Hessea flowers generally resemble those of Strumaria and Nerine, all genera within the same family. Some of the Hessea species have their two or three tongue-like leaves simultaneously with the inflorescence, not flowers first and leaves later (Cowling and Pierce, 1999; iSpot; http://redlist.sanbi.org).