Home » TYPES » Shrubs » Paranomus reflexus
Back to Category Overview
Total images in all categories: 9,402
Total number of hits on all images: 4,225,603 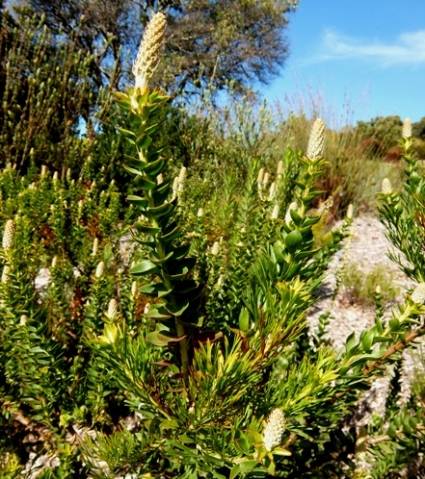 Paranomus reflexus, the green bottlebrush or Van Staden's sceptre, is a dense, evergreen shrub growing to heights from 1 m to 2 m and almost as wide. Paranomus, one of the lesser known genera of the Proteaceae family, comprises 18 or 19 species that all grow in the fynbos.

The distribution of P. reflexus is in Eastern Cape fynbos on sandstone slopes around Humansdorp to Port Elizabeth, the most easterly distributed of all the Paranomus species.

The plant grows in small stands at elevations between 1000 m and 2000 m in a region of Kouga sandstone fynbos where limited rain falls throughout the year. The species is considered to be threatened in its habitat early in the twenty first century due to alien plant invasion and afforestation (Matthews and Carter, 1993; Eliovson, 1983; www.plantzafrica.com; http://redlist.sanbi.org).