Home » GENERA P » Paranomus » Paranomus
Back to Category Overview
Total images in all categories: 12,061
Total number of hits on all images: 7,359,633 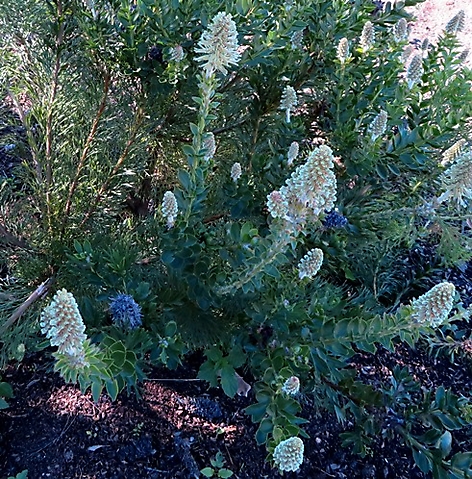 Paranomus, commonly known as doll’s bush on account of the inflorescence shapes, is a genus of shrubs in the Proteaceae family.

The alternate, stalked leaves often grow in two forms on the same plant, hairy or not. The leaves are either narrowly dissected into needle-like, cylindrical segments, or the upper leaves are ovate, spoon-shaped or fan-shaped.

The flowers grow in whorls of four in cylindrical, bottlebrush-like spikes at stem-tips, sometimes with axillary spikes as well. The floral bracts of the individual florets may enlarge and become hard, rounded shell-like structures, after florets open or become pollinated.

Each bisexual floret has four perianth segments, the style ending in a pollen presenter. It receives pollen for distribution from the anthers in the perianth segments before being released and straightening. The pollen presenter only later becomes susceptible to pollen from elsewhere when it's own pollen has been distributed or has become disfunctional. The ellipsoid ovary contains a single, pendulous ovule.

The fruits have fleshy elaiosome attachments serving as ant food, benefiting from seed dispersal by the ants.

There are about 19 Paranomus species, all occurring in fynbos of the Western Cape, few in the Eastern Cape. Many species are single-stemmed, reseeding after fire and browsed by game. The plant in picture is Paranomus reflexus (Leistner, (Ed.), 2000; Vlok and Schutte-Vlok, 2015; Manning, 2007; http://redlist.sanbi.org).