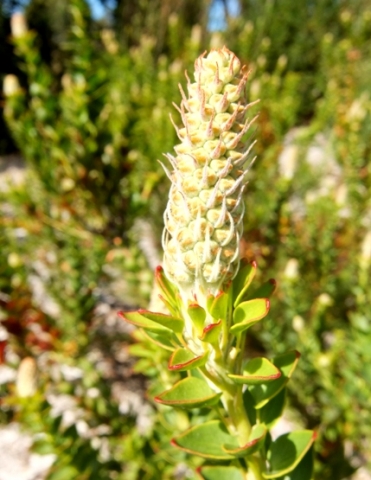 A Paranomus reflexus flowerhead conjures a miniature doll in the imaginations of some, resulting in the common name of doll’s bush, also used generally for plants of the genus. The flowerheads remind of bottlebrushes, another generic rather than specific feature.

Paranomus flowerheads consist of many whorls of four individual flowers, each subtended by a leathery bract that becomes woody with age, turning into a rounded shell-like structure. Flowerheads grow at stem tips, their flowers arranged in a kind of spike.

This budding P. reflexus flowerhead, shaped nearly cylindrically, was seen in Kirstenbosch in April. It is ready for opening in the normal flowering season of its species, which is winter. Its colouring is pale yellow-green already, but the bracts rather than flowers dominate the appearance at this early stage.

The flowers will appear tubular when they develop, the perianths later reflexing, creamy green to buff coloured below the pollen presenters. A flowerhead becomes about 12 cm long and 8 cm in diameter when open.

The seeds of Paranomus are covered in fleshy coverings called elaiosomes relished by ants that carry them away to eat later. Just what is required for seed dispersal. Seedlings are common in habitat after fire, vulnerable in their early developmental stage (Vlok and Schutte-Vlok, 2010; Matthews and Carter, 1993; Eliovson, 1983; www.plantzafrica.com).