Home » GENERA P » Paranomus » Paranomus bracteolaris buds
Back to Category Overview
Total images in all categories: 12,061
Total number of hits on all images: 7,359,606 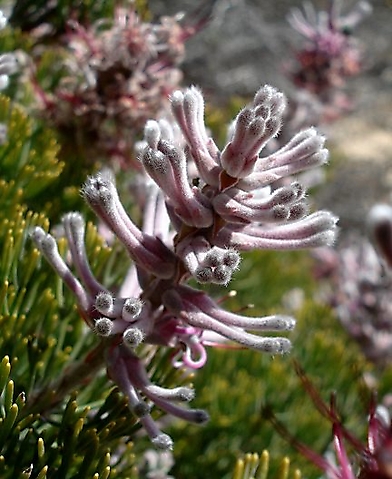 The buds of Paranomus bracteolaris grow in cylindrical spikes cohering in groups of four, their woolly tips neatly together. The lower buds of the spike in picture have separated, their moment of opening approaching.

Apart from velvety white to faint pink surfaces and slight curvature, the dark-tipped cylinders resembling matchsticks. Some hairs at the tips are longer.

Each perianth has a short, pointed bract around its base, dark reddish on the inside. It may be these floral bracts that gave the plant its specific name of bracteolaris (Manning, 2007; Manning and Goldblatt, 1997; Bond and Goldblatt, 1984; iNaturalist; http://pza.sanbi.org).