Home » GENERA P » Paranomus » Paranomus bracteolaris
Back to Category Overview
Total images in all categories: 12,061
Total number of hits on all images: 7,359,688 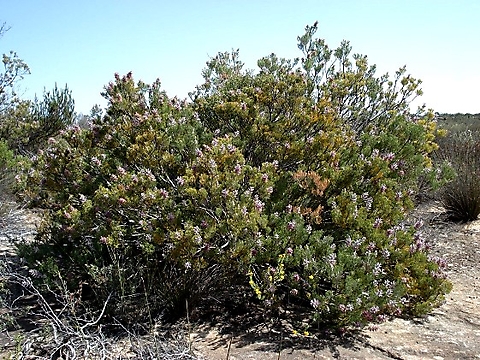 Paranomus bracteolaris, commonly the Bokkeveld sceptre and in Afrikaans the afveebos (wipe bush) used as toilet paper, is a single-stemmed, much-branched, often rounded shrub reaching heights from 60 cm to 2.5 m. It is here broader than tall. The upper branches may be reddish.

The species distribution is in the Northern Cape from the Bokkeveld Escarpment near Nieuwoudtville to the Koue Bokkeveld and Ceres in the Western Cape.

The habitat is rocky fynbos slopes and higher elevation flats in sandstone derived soils where the plants sometimes achieve dense stands. The plant is considered to be near threatened in its habitat early in the twenty first century due to rooibos plantations, invader alien plants, infrastructure development and some inappropriate fire management (Manning, 2007; Manning and Goldblatt, 1997; Bond and Goldblatt, 1984; iNaturalist; http://pza.sanbi.org; http://redlist.sanbi.org).