Home » TYPES » Shrubs » Heterolepis aliena in Fernkloof
Back to Category Overview
Total images in all categories: 10,683
Total number of hits on all images: 5,344,455 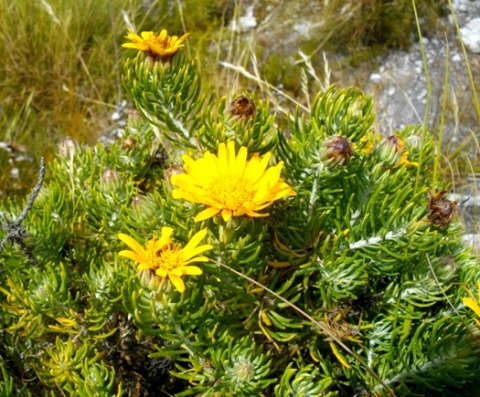 Heterolepis aliena, yet another daisy-flowering plant of the Asteraceae family, belongs to a genus of three species, all South African. The fynbos also has H. peduncularis with long flower stalks and smaller, less conspicuous flowerheads. H. mitis, a straggling shrublet that reaches 20 cm in height, grows on rocky hillsides in the Eastern Cape from the Kouga Mountains to Uitenhage, flowering in January.

The rock daisy in picture, photographed in December in Fernkloof at Hermanus, shows glimpses of white stems where the needle-like leaves fail to cover them. The leaf tips curve inwards. They have some yellow discolouring from the dry summer season. The often seen cobwebby appearance of the leaves from hairiness near the stem tips is in evidence (Manning, 2007; Bond and Goldblatt, 1984).