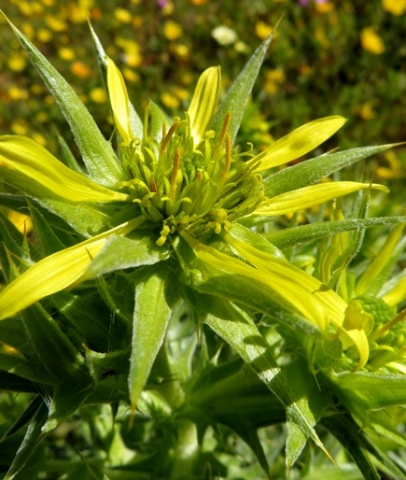 This Heterorhachis aculeata flowerhead has some long, thin, yellow-brown anthers protruding above the disc floret corollas. The five long, narrow segments of each disc floret curve out in their upper halves, while forming a slender-based, funnel-shaped cup below.

Outside the rudimentary ring of stick-like anthers, the disc floret male component, there are older open disc florets from which two-branched stigmas protrude. The stigmas seem to develop slightly later than the stamens in these bisexual mini-flowers. The youngest florets right in the centre of the flowerhead are still closed in the bud-phase.

The circular frame of spreading rays and bracts around the disc florets comprises only a few, spaced rays. They appear soft and flimsy above their sturdy upper bract counterparts that are longer and, of course, spine-tipped (Leistner, (Ed.), 2000; Bond and Goldblatt, 1984; iNaturalist).