Home » TYPES » Shrubs » Heterorhachis aculeata
Back to Category Overview
Total images in all categories: 11,792
Total number of hits on all images: 6,949,091 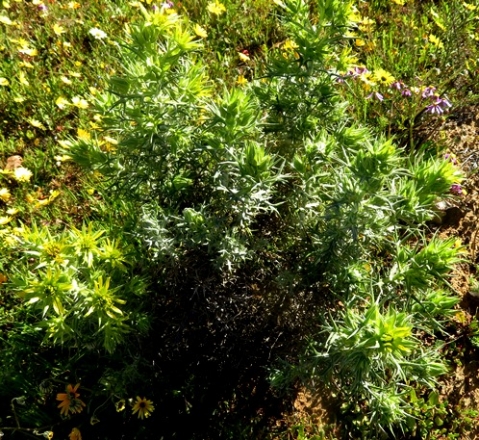 The species distribution is in the southwest of the Northern Cape and the west of the Western Cape from Nieuwoudtville and the Bokkeveld Escarpment to Malmesbury, Koeberg and Worcester. This plant was encountered near Nieuwoudtville.

The habitat is variable fynbos vegetation in acid, sandy and granitic soils. The species is considered to be vulnerable in its habitat early in the twenty first century, its population decreasing due to wheat and rooibos cultivation, urban expansion and invading alien vegetation.

Until recently it was believed that H. aculeata was monotypic, but a second species, H. hystrix, is now known from a restricted distribution near Graafwater in the Western Cape, these days entirely surrounded by crop fields. H. hystrix is listed among the increasing number of critically endangered plant species of South Africa (Leistner, (Ed.), 2000; Bond and Goldblatt, 1984; iNaturalist; http://redlist.sanbi.org).