Home » TYPES » Shrubs » Elytropappus rhinocerotis
Back to Category Overview
Total images in all categories: 11,793
Total number of hits on all images: 6,942,127 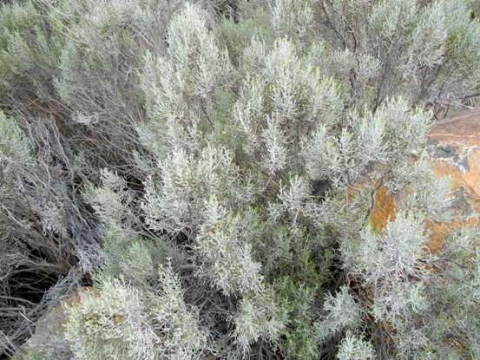 The renosterbos (Afrikaans for rhinoceros bush) as Elytropappus rhinocerotis is commonly known, is dominant in large tracts of land in the Western Cape and Eastern Cape. This dominance by an unpalatable shrub has over generations of farming become accentuated through some inappropriate farming practices. Regions like the Robertson Karoo, the Little Karoo, the Langkloof and the Kouga count among those that have big areas dominated by renosterbos. The plant also grows in parts of the western arid veld of the Northern Cape and as far north as Namibia.

It is easy to forget that E. rhinocerotis is a member of the Asteraceae or daisy family because the flowerheads are so small. These light brown flowerheads of 5 mm in diameter appear in spring and summer. The triangular leaves are tiny as well, 2 mm long and 1 mm wide, pressed to the woolly white young stems. Older woody stems become gnarled with smooth grey bark. The taproot reaches depths of 6 m, ensuring the plant reaching moisture in drought conditions.

The renosterbos is host to a number of insect species. It has played an important part in traditional medicine, relating to chest and stomach conditions and even “winter feet” (Vlok and Schutte-Vlok, 2010; www.plantzafrica.com).