Home » TYPES » Shrubs » Exomis microphylla var. microphylla
Back to Category Overview
Total images in all categories: 11,792
Total number of hits on all images: 6,949,168 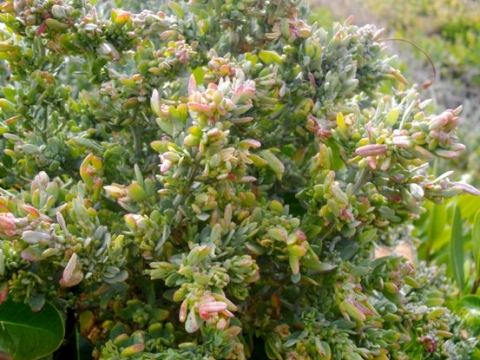 Exomis microphylla var. microphylla, in Afrikaans known as hondebos (dog bush) from the earlier hondepisbossie (little dog urine bush), is often just a small shrub of around 30 cm, although it sometimes reaches heights around 90 cm. Another Afrikaans name, brakbossie, is ambiguous as the meaning may be dog bush as brak is either dog or brackish, referring to a condition of water or soil.

The succulent leaves of the plant are densely massed along the branched stems, only rarely allowing a glimpse of the stem itself. The leaf midrib is prominent. Leaf shape is ovate, usually narrowly so, to oblong, often twisted or bent, with entire margins. Leaf surfaces have a whitish, mottled appearance with red tips or are especially red around the upper parts of the margins, in contrast to the predominant pale green or bluish green colours.

Many different leaf sizes are present simultaneously on each stem, as can be seen on this plant photographed at Onrus, close to the high tide mark (Van Wyk and Gericke, 2000; Bond and Goldblatt, 1984).