Home » TYPES » Shrubs » Elytropappus glandulosus
Back to Category Overview
Total images in all categories: 11,779
Total number of hits on all images: 6,931,770 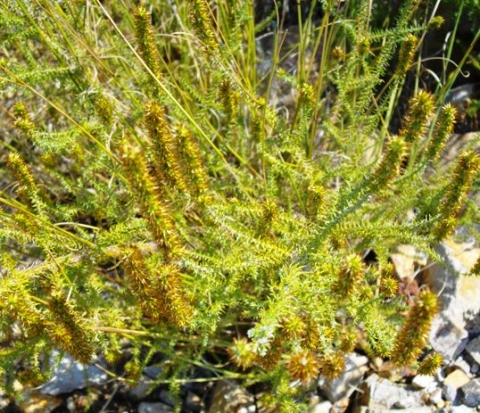 Elytropappus glandulosus is a much branched shrublet with needle-like leaves. There are many gland-tipped hairs on the leaves. Clusters of small yellow-brown flowerheads appear in autumn and early winter.

The plant is found on mountain slopes in the Western Cape, south from the Cederberg and west from Swellendam. The habitat is sandstone fynbos. The species is not considered to be threatened in its habitat early in the twenty first century.

This is one of 10 species in the Elytropappus genus, all confined to the fynbos region. The most well-known plant among them is the renosterbos or E. rhinocerotis. The genus forms part of the Asteraceae family (Manning, 2007; http://redlist.sanbi.org).