Home » TYPES » Shrubs » Elephantorrhiza elephantina flower spikes
Back to Category Overview
Total images in all categories: 11,779
Total number of hits on all images: 6,931,777 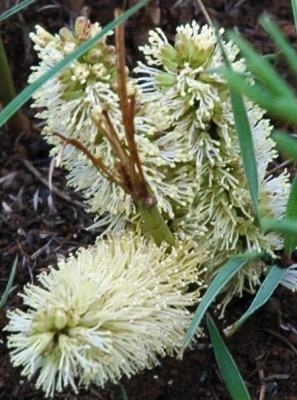 Elephantorrhiza elephantina, commonly the elephant’s root or in Afrikaans baswortel (bark root), is a shrublet often seen in large colonies. Each colony is in a way the top branches of a large underground tree; large and old, as the extensive root system gives rise to several visible above-ground “plants”. The generic name, Elephantorrhiza is derived from Greek, meaning elephant’s root.

The scented flowers grow in cream to white catkin-like spikes, appearing from the stem base at ground level. Flowering can be expected from end winter to mid-autumn. A spike may be from 3,5 cm to 8 cm long. The long woody fruit pods persist on the plant after releasing their seeds.

E. elephantina occurs widely in southern Africa, from the Free State and KwaZulu-Natal through all the provinces north of the Vaal River. It also grows in some neighbouring countries of southern Africa.

The plant's habitat is summer rainfall grassland, where the winters are cold and veld fires common. The species is not considered threatened in its habitat early in the twenty first century (Pooley, 1998; Van Wyk and Malan, 1997; www.plantzafrica.com; www.redlist.sanbi.org).